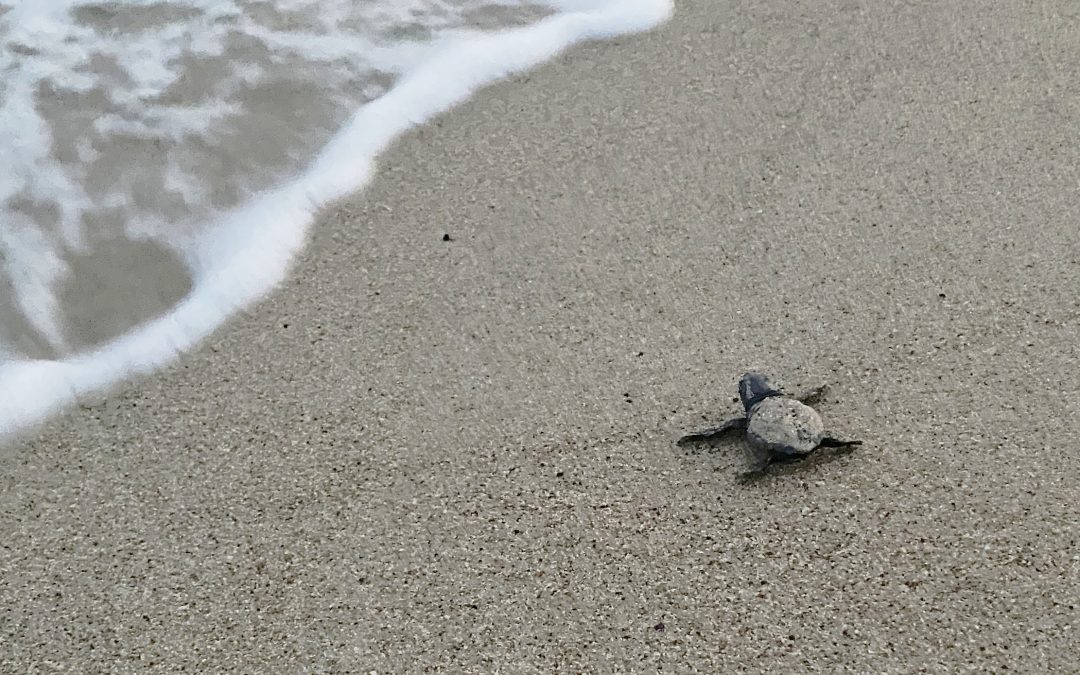 Do you remember that on July 20th a Caretta-Caretta turtle had deposited 115 eggs on Panaghia beach? We have continuously checked the nest and decided to fence an area of the beach with sticks in order to facilitate to the baby turtles the exit to the sea.

We were worried when we saw footprints of seagull and cats in front of the nest.

So we decided to check the nest… even at night !

Maria Aronis and Jannis, the managers of Laconia in following the evolution of the various nests, had informed us that the gestation of turtle eggs lasts from 45 to 80 days… so since early September we are anxiously waiting. On September 14th, in the early morning, at exactly 7.34am, Henry with great joy discovered that some turtles were born and ran to the sea leaving their tracks.

Unfortunately, a turtle, which turned belly up, could not make its way to the sea.

Immediately Henry helped her turn around and…

…as you will see from the video at the end of the article, Clementine (so we called the turtle), headed towards the water and with difficulty in a slightly choppy sea swimmed among the waves and took off: Well done Clementine !
David, Raphael and Federica with Pluto also got to see the tracks.

When will the next turtles be born? Seagulls that flutter around the nest were a warning sign.

On September 16th at dawn, Henry again (the earliest of the group), noticed the tracks of the new born and a last lag turtle that trudges towards the sea.

The weather is running out and a hurricane was expected to make its way over Greece. If the sand got wet, the turtles would risk dying stuck in the hardened sand. We decide with the mastery of David and Kostas to cover the nest.

We now held tight shifts day and night and Harald and Reingard were also added to our group.

With Kostas’ help, we improved access to the sea for new born ones and to keep the ravenous seagulls under control.

But we were not lucky… we could only still see the tracks heading out to the sea. We were confident!

One morning, Kostas saw the nest strangely sunken so we decided to immediately call Mary to come and see.

It turned out that 23 turtles were born while the other eggs had not been fertilized. It means that the male did not work well !! In Greek, this type of eggs are called “agonimopoieta”.

Maria and Jannis thanked us very much for the care and love shown. They told us that, by their estimates, every summer about 25 turtles come to lay their eggs on the beaches of Elafonisos. Unfortunately, the nests are involuntarily trampled by tourists and not being cared after and supervised as we did in Panaghia where were born few turtles. I believe you know that female turtles mate at the age of 25. They are prolific until the end of their lives that can reach up to 150 years. How lucky they are … and how lucky are the male turtles !!!

We propose a petition: volunteers for summer 2021, you are welcome ! This way you can help us to well cure the nests and enable births of baby turtles and help a great number of turtles to reach the sea, following the example of Clementine.

Email us: info@elafonisoseco.org,we will welcome you.

Let’s end this news with two videos that summarize this beautiful and exciting adventure.